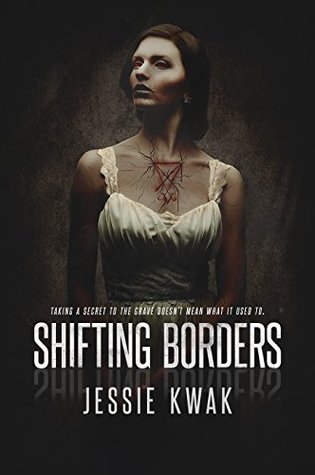 A ghost-possession story where the possessing entity is the victim? What’s not to love?

Shifting Borders takes you into a reality tweaked just slightly out of tun with ours – it’s set in a Seattle with just as much drizzle, traffic, diversity and tribulation as the real deal, but with demonstrably real ghosts. The story starts with grief – not shattering, melodramatic grief, but the later, numb, hollow feeling as new loss becomes part of the new normal. Moved by sympathy (and the road to hell is paved in what, my friends?) to give her younger sister Val a chance to say goodbye to her departed boyfriend, Patricia agrees to help Val raise Marco’s ghost. The intervention of drug-running thugs throws a wrench in the works, and Patricia ends up with Marco’s ghost stuck inside of her.

As a Latina single mother in an expensive American city, Patricia’s life keeping her family on the straight and narrow had been a struggle before. Now, with her sister’s boyfriend’s ghost shacking up inside her manifesting all sorts of poltergeisty urges, and her pincushion hot mess of a sister bringing violent drug smugglers and black magic into her life, Patricia loses her grip on what normalcy and security she had managed to hold onto.

The hits in this supernatural murder-mystery keep piling up on Patricia as the consequences of her sister’s illicit dealings spill over into her life, drawing her and her family into ever-increasing peril, and it is her strength as a mother and protector that – shakily at first, but with growing confidence as the situation becomes more desperate – pulls her through a multi-layered confrontation with evil.

Expository world-building is one of my touchstones, and mad props go to Jessie Kwak for keeping this story rooted in direct, realistic experience, and allowing the fantastic elements to unfold naturally, without dragging the pace down with exposition. The story comes to us fresh, unencumbered, and immediately realistic. Indeed, despite the fantastic elements, this is in no way a fairy tale. It even side-steps many of the common temptations of fantasy – magic is alive and powerful in this story, but it provides no release from grief or pain. The dead can speak, but coping with loss and fighting back to a life of joy and healing still happens only with time and the gentle application – and willing acceptance – of the more simple human magic we all know.