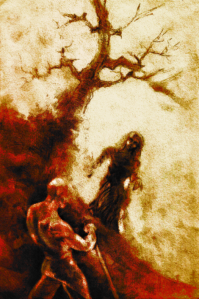 The current issue of Kaleidotrope pulls together some astounding and radical works of speculative fiction. Well worth the read. Whether intentional or not, the theme of this collection seems to be “world-building in tight spaces.” We get to visit some very strange places in this issue, made all the more interesting by how close the authors hold their cards to their chests.

“Rites of Passage” by Julia August – Just drops you right into a different world, an engrossing glimpse into the rise of a dynasty from the golden sands of a mystical desert. The people and cultures are truly foreign to us, the magic is wild and doesn’t deign to explain itself or be understood. But the mystery and the compelling drive of the characters draw you in and leave you hungry to know more of this world.

“Dance of the Splintered Hands” by Henry Szabranski – Strange, and I say that with love and admiration. A reality where the agents of gods can turn feral, and the gods’ retribution is swift and thermonuclear. Henry kept close to the story of love and terror in a bewildering world, leaving the worldbuilding light and natural, which made his vision all the more vivid.

“Alviss the Dwarf” by David A. Hewitt – Most of us know something about Norse legends and characters. Some of us even learned a bit from sources that aren’t Marvel. But the old epics always had a bit of a remove to them, a barrier of epic self-awareness. What David accomplishes is a story of one night in Val-Holl that feels genuine, rather than the sterilized press-release-for-the-public feel original epic writing and translations have.

“There Are Rules” by William Stiteler – A planet with OCD, and all inhabitants have to obey its rules and rituals? Hell of a story, handles worldbuilding (of a strange world indeed) very well  for such a short piece. I always jive with characters who buck the established norms. Innovators are often seen first by the establishment as heretics, but suffering the occasional shake-up is what the establishment is for.

“To Claim a Piece of Sky” by Crystal Lynn Hilbert – A lot of the context of this story is left vague, but the quality of the writing and the depth of the protagonist’s toil will draw you in through the mystery. Words can be crafted to meet every rule of logic and grammar, and yet describe things completely beyond reality, or at least beyond the spectra we can grasp with our senses. Crystal uses that potential well as her protagonist – who is something beyond human – grapples with a fragile sense of reality. You get a sense of what she is experiencing, but the gaps and sensory mis-matches leave you with a feeling of unease and uncertainty as precarious as the protagonist’s own experience.

“Obsidian” by Beth Cato – Striking imagery, I’ve felt the need to burn out as something new from within me, leaving myself behind. Ultimate escape. Conjured moods and images from Under the Skin, but with more overt emotions.

“The Unicorn” by Amanda C. Davis – Where the magic really is.

“Your Future and Mine” by John Grey – Crams a whole space-epic into a one-page poem. Makes you wonder what all the big fat novels are for.

Horoscopes – Mine (Pisces) was a little meh, but we fishes usually get the short end of the stick, and we rock the shit out of it anyway. As for the rest of you, this season’s horoscopes are highly entertaining, and probably provide  better advice than most newspaper horoscopes.

There is a lot of new, strange, wonderful ground-breaking storytelling going on in our world, and Kaleidotrope does a solid job pulling some of the brightest, most daring and challenging pieces together into its issues. Give them a look, spend some time, dive into some tales that push beyond the common reaches of speculative fiction and into the new. Dig it!